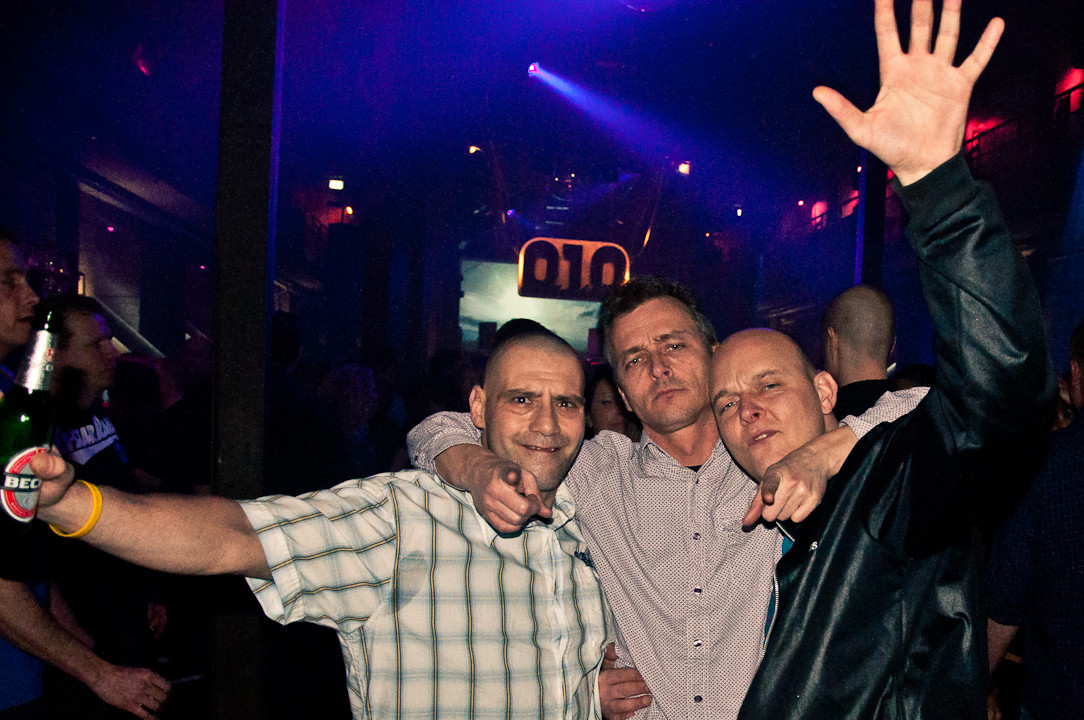 Also: “Could I take your picture with your camera?”
Annoying for two reasons.
Firstly, no, I am probably not in any of these pictures, because I take the pictures. Camera’s usually only take pictures in one direction, use some common sense.
Secondly, no you may not use my camera to take a picture of me, yet again, this has two reasons. First of which, camera’s are goddamn expensive, and I am not well insured.
Second of which, if I really want a picture of my self right now, I can flip the damn thing around and take a myspace-style hand-held photo of myself, it’d probably still turn out better than anything you’ll be able to do right now, you drunk fuck. 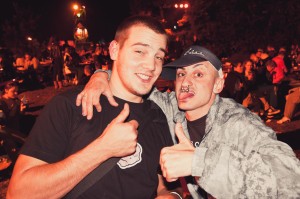 I will however, pose with awesome people on occasion. That guy with the nose ring is awesome.

Well of course I can, and I will, and I’ll delete the fucking peace-fingers duckface-fest piece of shit as soon as you turn your head, so don’t bother asking.

The main problem here is that there’s two kinds of party photographers. The first kind is those who want to make a good looking impression of the night’s feel and the other kind are there to take pictures of people, to lure them to partysites like partyflock.

I am a photographer of the first kind, and I hate being stopped about 50 times in 5 minutes when I’m heading from the stage to the back of the room to get a different perspective. You are probably ugly, and the picture I’ll take of you will probably not be interesting to anyone but you, so fuck off. 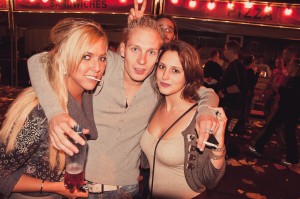 Or I’ll just ask one of my friends to photobomb it.

03. where will these be posted?

If the party is big: it’s not my fucking job to distribute these things, check the party’s website/facebook.

Otherwise, they’ll just be on my facebook, and you’ll be tagged. So stop worrying about it and enjoy the fucking party.

No. There’s probably over a couple hundred on my camera right now, most of which are underlit, overlit, badly shot, blurry or just plain uninteresting. Why on Thor’s green earth would you want to waste both our time right now looking at a 3,5″ piece of shit screen when you can peruse a finer selection of photo’s at an opportune time later? Maybe when you need an excuse to stop gobbling cock for five seconds.

Yes I can. I won’t remember which picture you asked me not to post anyway. If you don’t want to look like an idiot in photo’s, try not getting so drunk you throw up on yourself. I can’t help you with how horrible you look though, that’s probably just you. 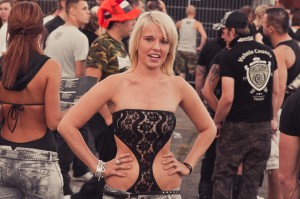 She objected to me posting this on the internet, I objected to her outfit. Looks like we both lost.

Wondering why I’m such a sour, deprived shell of a human being? Well here’s why:

That’s right, I usually don’t get paid, and if I do, it’ll probably be less than you are spending tonight.

I’ve traveled all across the Netherlands, shooting for parties, I’ve slept on more floors and chairs than I care to remember. I’ve not known where and/or if I was going to sleep that night on several occasions and I’ve spent countless hours in cold train stations waiting for the first morning train.

03. do you need a safe place to stash your gear?

Yes, yes I do. My gear is literally the most valuable stuff I posses! Backstage? Yeah sure, I’m sure no-one who isn’t supposed to be there has access to it. Especially not those shady sort-of-friends-of-the-DJ characters I just saw back there.

Fill in for x:
– Duckfaces
– Peace signs
– Pulling a bass-face and looking at the camera, not at the DJ
–  Thumbs up, thumbs down, middle finger, any kind of gesture aimed at the camera purely because you know ‘it’ll make a cool picture’. 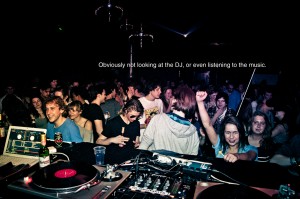 You can tell how much she likes the music by her not looking at the DJ.

Oh look, you’ve gone ahead and done it anyway. Gee thanks.

Made my day!
I hope it gets enough publicity and may ’cause some change.
But it was nice to see that party photographers still have the same kind of problems;)

First of all, if you look at the blog, it hasn’t been updated in about a year. I’m wikorng on a new site so please don’t judge me : )Second, I was interested in seeing if you have August 13th available. My fiance and I are getting married and looking around for photographers. We’re both creative and artistic. I like the photos you did with the red ribbons and i think we’re looking for more unique photos like that. I like your style of photography and would be interested to see if that date was available and go from there!Looking forward to hearing from you soon!Erin